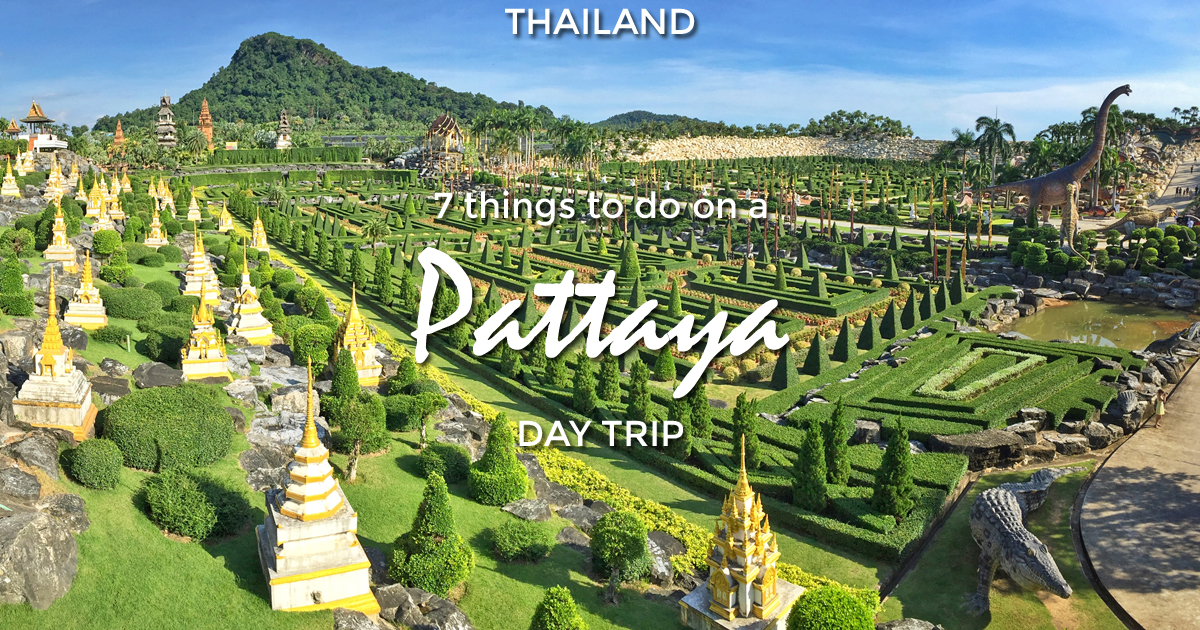 While Bangkok offers a vast array of sights and delights to entertain you, sometimes you want to make a quick getaway to other parts of Thailand. Only a couple hours from Bangkok by bus, a Pattaya day trip might just be what you’re looking for.

Pattaya definitely embraces its tourist vibe, but if you go in with that frame of mind, you’ll surely find some fun in the seaside city. Elephants dunking basketballs, Muay Thai boxing demos, humungous Buddhas etched into mountains, floating food markets, and an applause-worthy Thai iced tea preparation—that’s just some of what I encountered. Here are 7 cool things to do during your day in Pattaya.

1. Ride an elephant around the Sanctuary of Truth

Tucked in a northern corner of Pattaya, the Sanctuary of Truth is a unique religious construction featuring hundreds of evocative Hindu- and Buddhist-influenced wood carvings. It’s pretty trippy and pictures do it better justice than my words can. 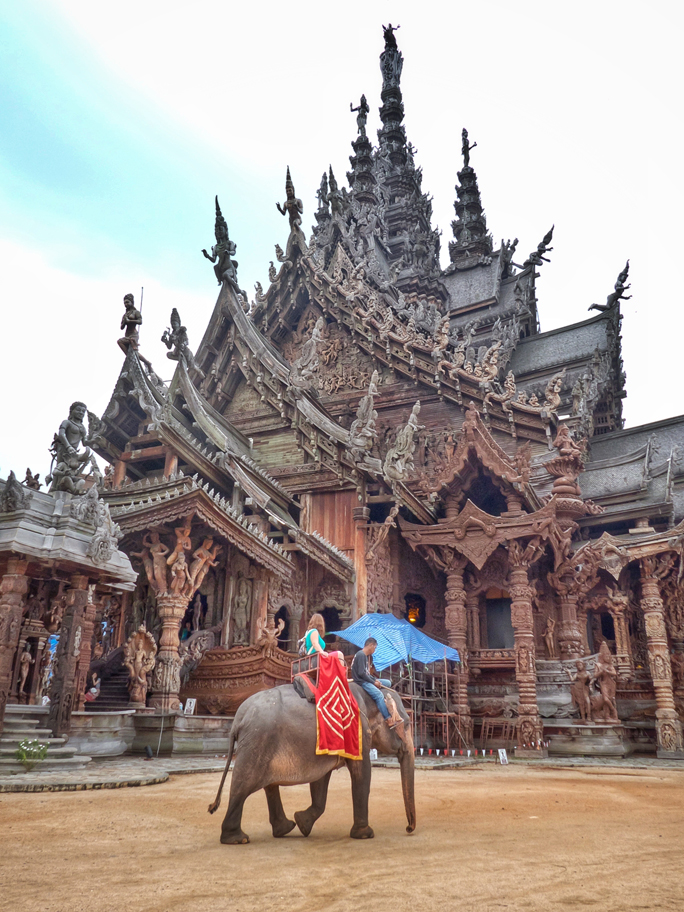 If you want to get off your feet, you can go for an elephant ride around the premises. 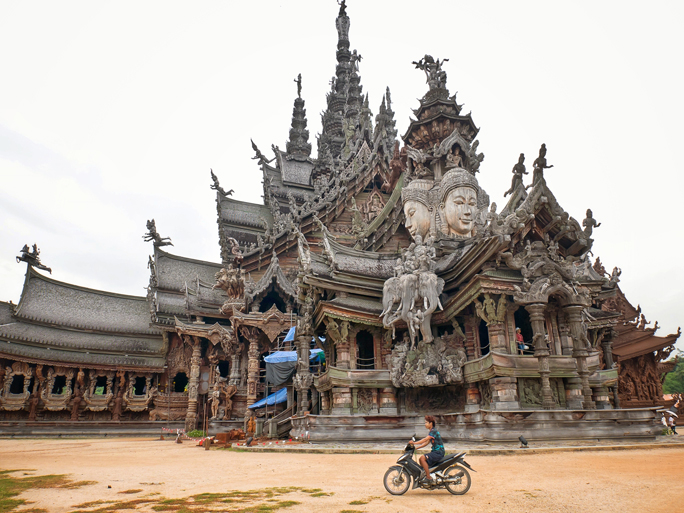 Apparently you can also ride your bike around the Sanctuary of Truth and I’m down for the juxtaposition.

2. Wander the grounds of the Nong Nooch Tropical Garden 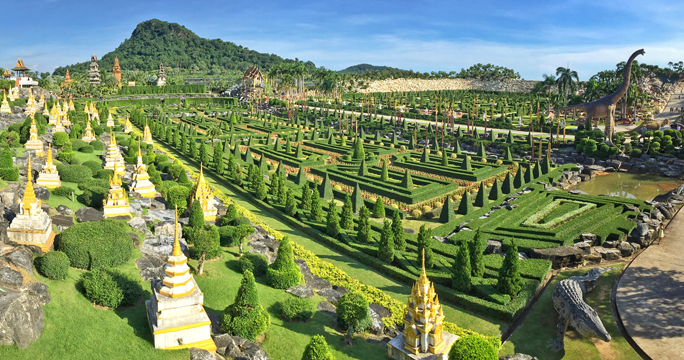 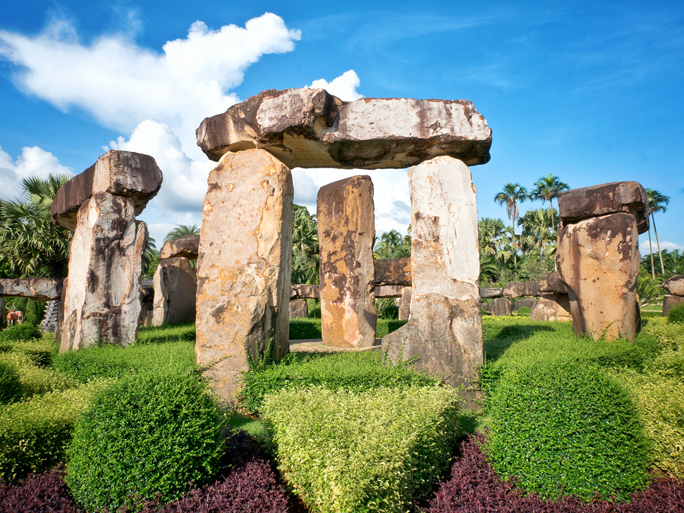 Nong Nooch Tropical Garden is a popular Pattaya attraction known for its well-manicured, themed gardens and its elephant show. There’s a lot to see on the garden grounds, but a one-day Pattaya itinerary with many stops might not afford you the time to leisurely stroll through all of it. The French Garden—with its variation on the famous Palace of Versailles gardens (plus a dinosaur nearby for some reason)—and the Stonehenge replica were highlights for me.

3. Watch an elephant dunk a basketball at the Nong Nooch Elephant Show 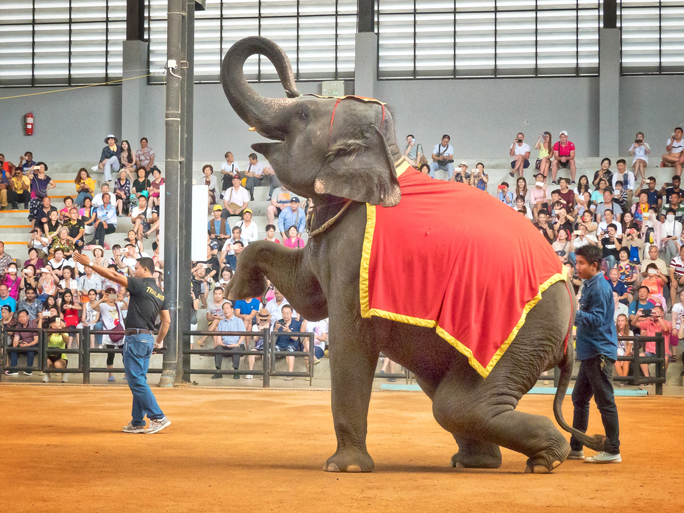 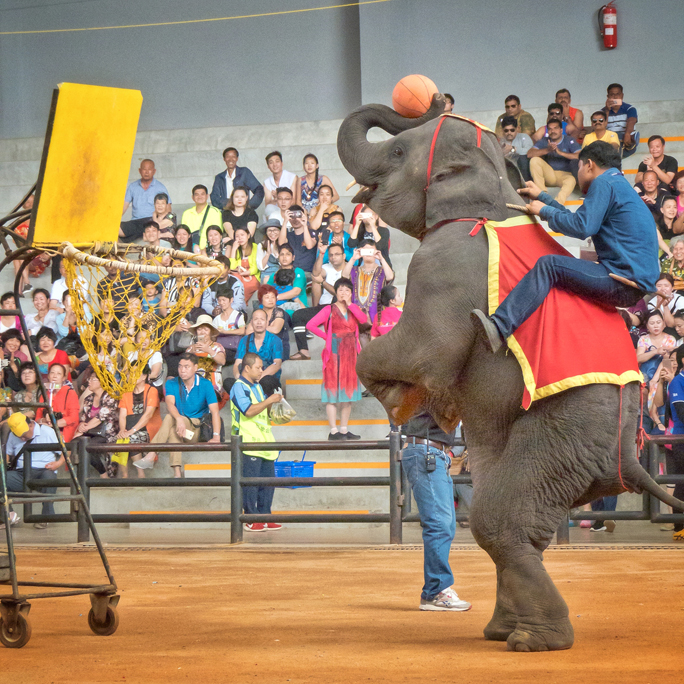 The Nong Nooch Elephant Show is good, touristy fun, with the well-trained mammoth mammals (and some cute baby elephants) performing all sorts of crowd-pleasing tricks. Dunking basketballs, kicking soccer balls, throwing darts to pop balloons and painting with their trunks are all in the elephants’ repertoire, but their best skill might be getting tips from the audience. Those elephant trunks are quite adept at catching those bills and delivering them to their human riders. Gotta respect the game.

Before and after the show, you can also get your picture taken with the elephants for a small monetary donation. They’ll let you sit atop an elephant or have one or two of them carry you with their trunks. Fun photo opportunity. 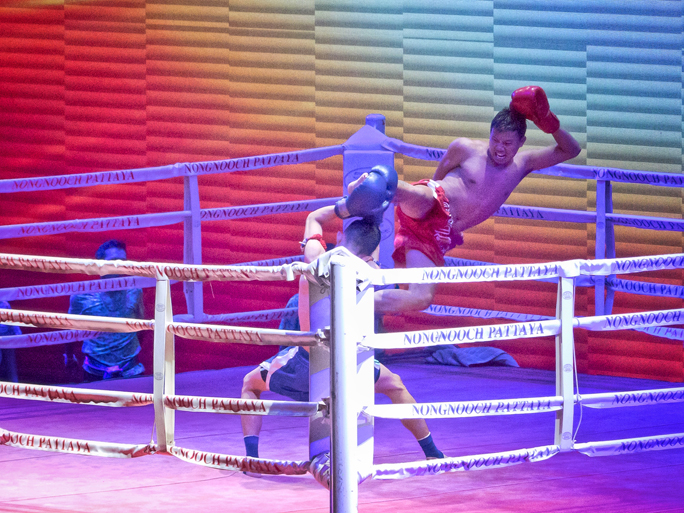 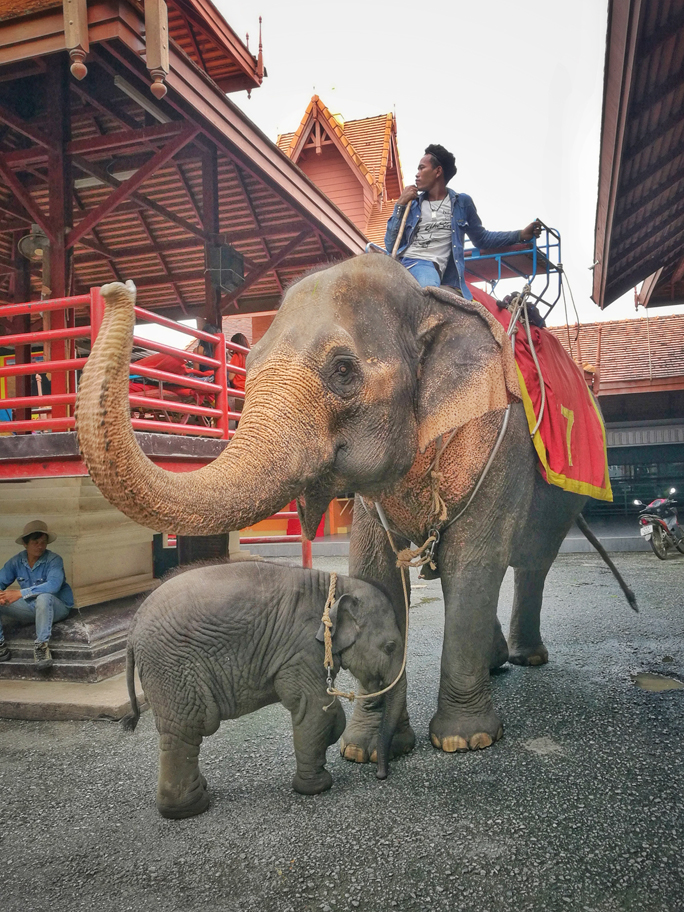 Outside the venue, you might run into some of the show’s floppy-eared stars.

4. See the Khao Chi Chan Buddha on the side of a mountain 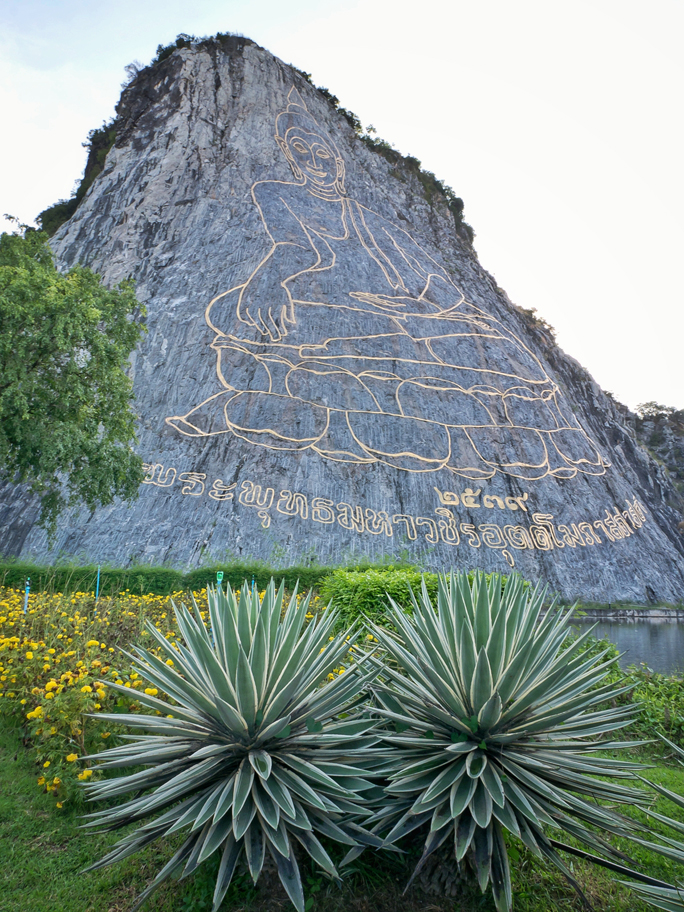 If you make it to Nong Nooch, you’ll also want to head out just a little farther to the Khao Chi Chan Buddha—a 130-meter tall golden image of Buddha carved into the side of a mountain. The “Laser Buddha,” as it’s also known due to the laser technology used to carve it, is definitely unlike any other Buddhist shrine you’ll come across.

5. Grab a quick bite from a boat vendor at the Pattaya Floating Market 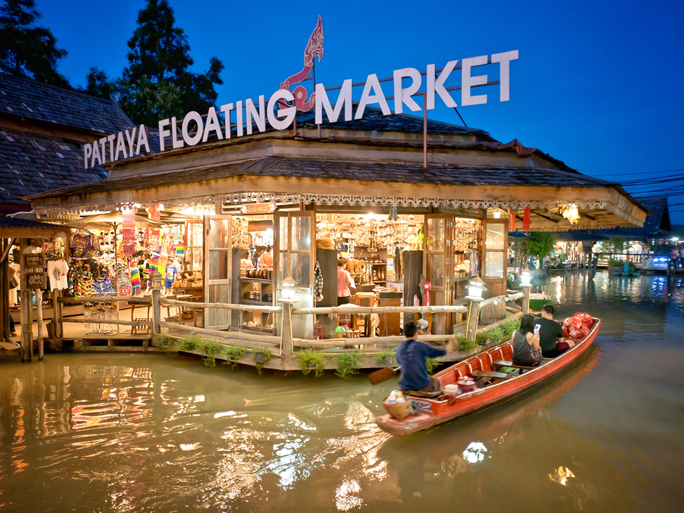 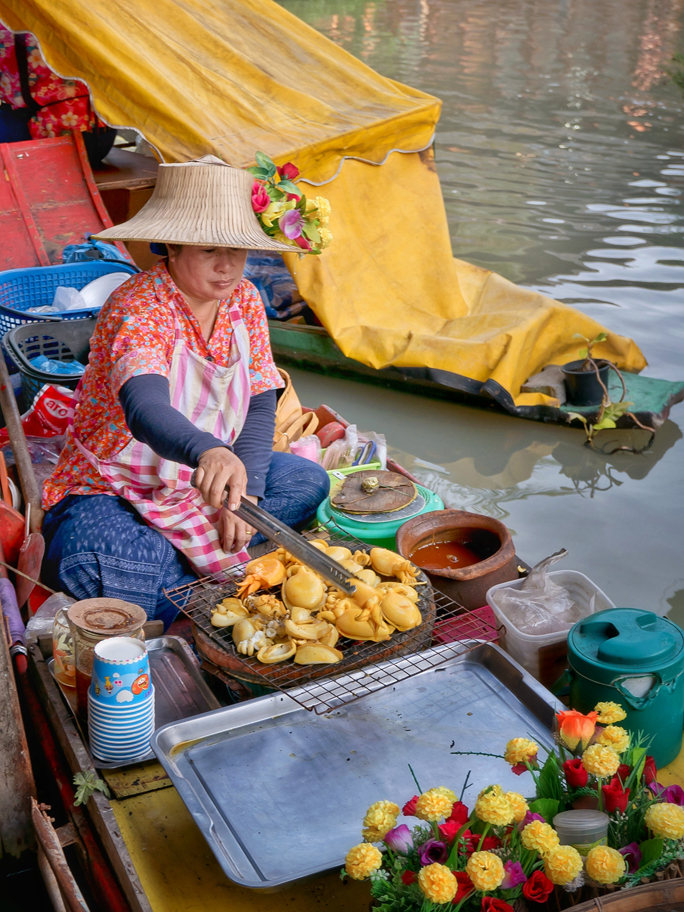 Colorful images of food vendors in boats rowing up and down the waterways drew me to another of the city’s popular tourist destinations, the Pattaya Floating Market. Though I arrived in the late afternoon hours when I assume the peak traffic had already died down, it was still cool to walk around the canals and see this unique approach to shopping and dining.

You can also pay to relaxingly float around the market in a boat—like a Thai version of a gondola ride.

The highlight for me at the Pattaya Floating Market was watching this guy make my Thai iced tea, working that beverage like he was competing in rhythmic gymnastics at the Olympics. I don’t know if it actually makes the drink any better—it was sweet and refreshing regardless—but I gave this hero a standing ovation.

6. Stroll through the nightlife on Pattaya Walking Street 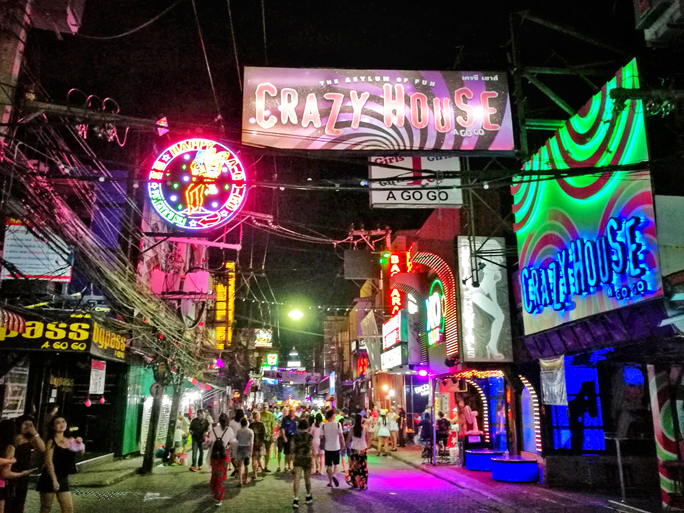 Pattaya Walking Street is the city’s touristy nightlife epicenter. Definitely lots going on here and it’s fun to amble down the street from end to end and take in the scene. 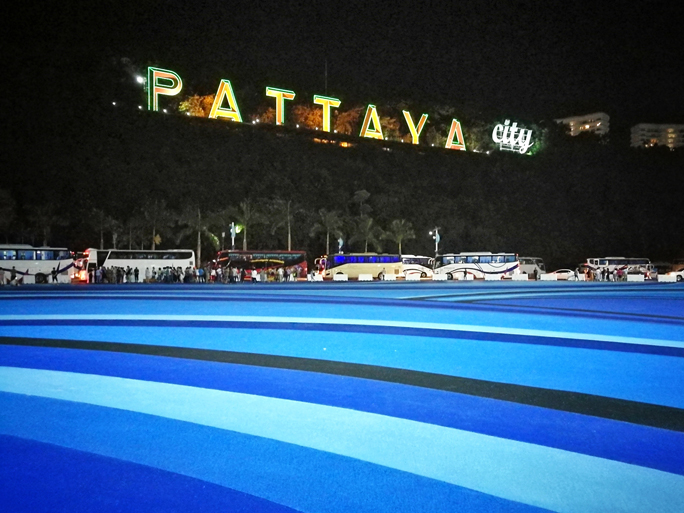 At the southern end of Walking Street, you’ll arrive at the Pattaya City Sign. Though it’s probably cooler to catch the sign during the day, climb up to it and see the view overlooking Pattaya and its beaches, the night view with this blue-striated artificial track in the foreground has its charms as well.

It’s also a good spot to catch a taxi or motorcycle to the bus station if you’re ready to head back to Bangkok and close the book on your Pattaya day trip.

Getting from Bangkok to Pattaya

Getting from Bangkok to Pattaya by bus is easy and incredibly cheap. The Eastern Bus Terminal offers the most frequent journeys to Pattaya and is just a stone’s throw away from the Ekkamai BTS Skytrain station. There are also departures from other bus terminals in the north and south of Bangkok, but the Eastern Bus Terminal will provide you the most convenience and flexibility. And the bus ride each way costs only a little over 100 Thai baht, roughly $3-4 US dollars. That’ll do. That’ll do just fine.

Upon arriving at the Pattaya bus station, you’ll have a few transportation options for getting around the city. During my day in Pattaya, I rode on the back of a motorcycle twice. I hired a driver to take me around to several sights (and wait for me as I took in the attractions). And I hopped on a songthaew—a shared passenger truck that is a popular mode of transportation in Thailand. Mixing it up, Pattaya style! 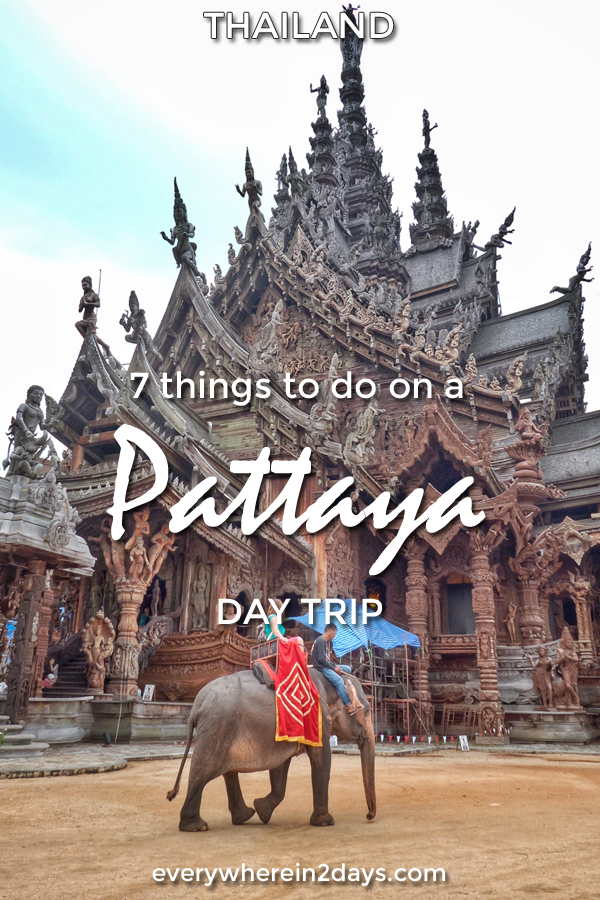 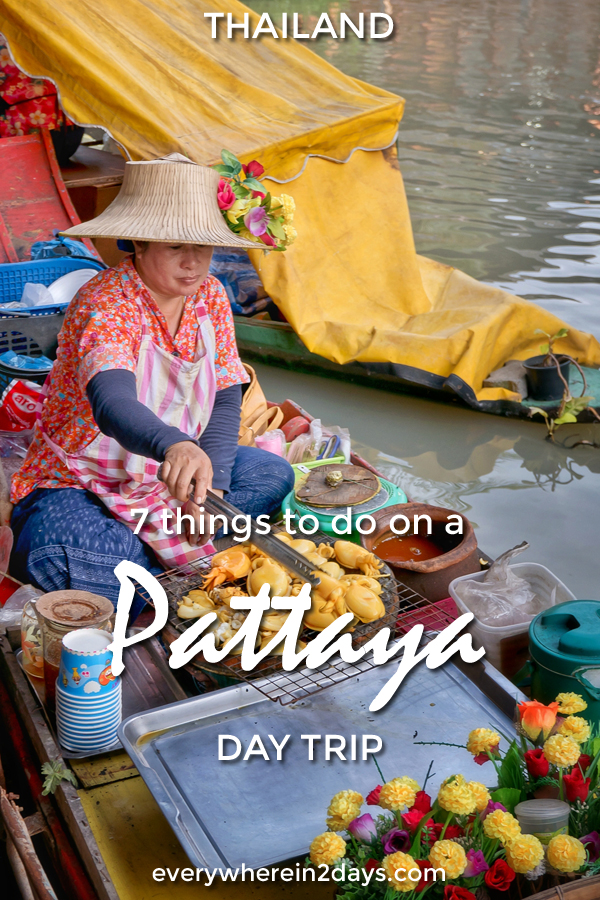 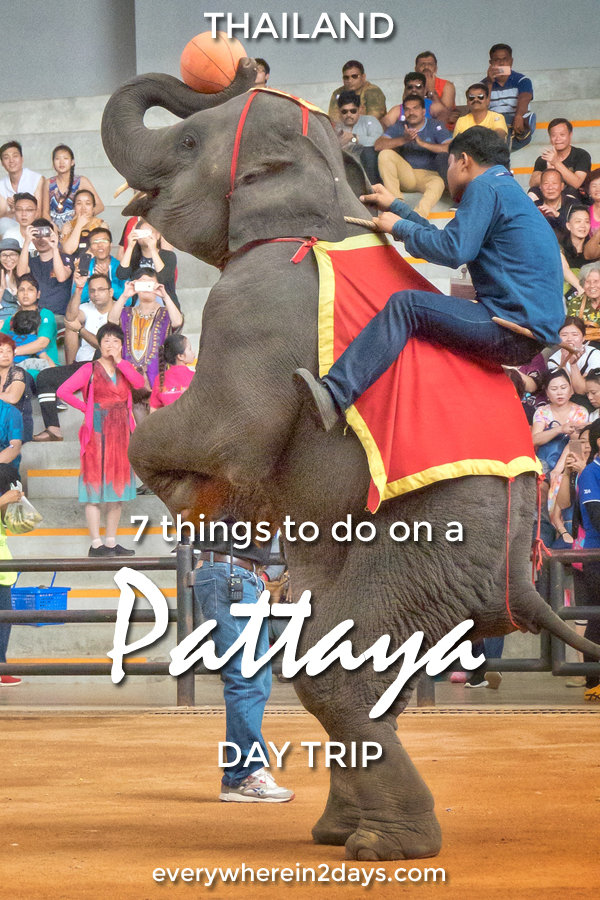 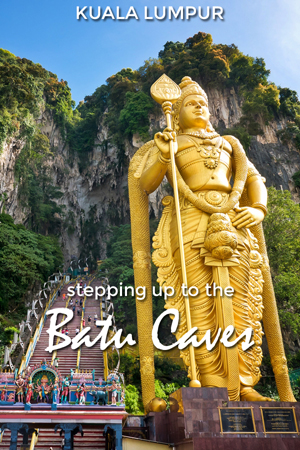 Stepping up to the Batu Caves in Kuala Lumpur 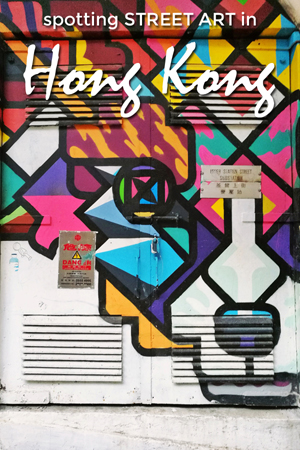 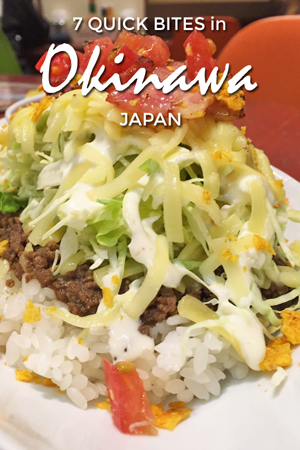